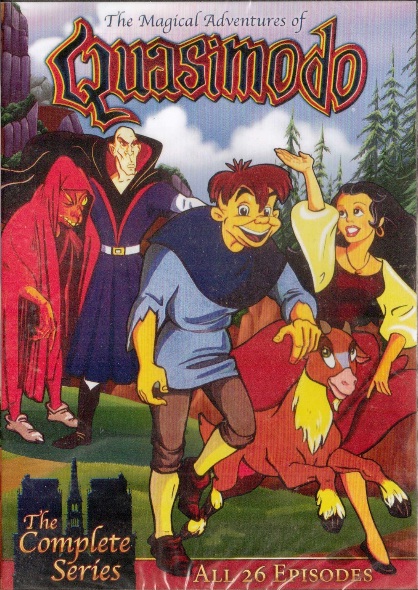 The Canadian animated cartoon, The Magical Adventures of Quasimodo, created by CineGroupe and distributed by Astral Programming Enterprises and Hearst Entertainment, and based on the classic Victor Hugo novel, The Hunchback of Notre Dame, focuses on the adventures of Quasimodo and his friends Esmeralda the gypsy and Francois the poet in medieval Paris, as they meet various characters, including various villians, and fight sinister plots and deadly traps. Their biggest enemy is the embodiment of all evil, Frollo.

I recently came across this cartoon late last September on a Canadian VHS released by the now-defucnt Canadian VHS outfit Astral Video, which featured the 2-part pilot episode, and I have to admit, I became intrigued by it. I never did see it as a kid, mostly because it aired on Canadian television and European television around the same time Disney's Hunchback of Notre Dame was released. Good animation, along with excellent voice acting, notably the voice of Canadian character actor, Vlasta Vrana as Frollo, and well-crafted plots, are what make the show worth watching. As for Quasimodo himself, he actually does more than just ring the bells of Notre Dame, among other duties. He never puts himself before others, is adventurous, brave, and kind. He does not let his hunchback get in his way and does not care what others think of him.

I recently acquired the complete series, released by Mill Creek Entertainment quietly in 2009/2010, for $6 on Amazon. This box set features all 26 episodes on 2 discs. I haven't watched all of the episodes on this set yet, but from what episodes I have seen so far, quality on said episodes seem to be okay. Audio is in English and is of acceptable quality as well, though I have read on an Amazon review that there is a glitch where at least one episode on this set has Spanish audio heard beneath the English audio. I am not sure which episode this is, as I have yet to encounter it, but as soon as I find out, I will report back on it.
Posted by Ryan W. Featherston at 11:45 AM 1 comment: