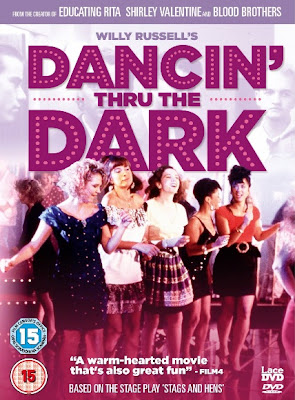 Mike Ockrent's Dancin' thru the Dark (1990), based on Willy Russell's play "Stags and Hens", is quite an interesting and humorous unknown gem.  While quite well known in the United Kingdom, it, unfortunately, is not as well known here in the United States as it is across the pond. Humorous moments, good acting, which is almost stage play-like, interesting Liverpool locations, and excellent dialogue and upbeat soundtrack really make the film so good.

Linda and Dave are about to get married. While she is on her hen night, Linda starts to have doubts about getting married.  Her doubts start getting major when her fiance, whose on his stag night, shows up at the same Liverpudlian night club she is celebrating at, and when the club's band happens to be led by her ex-boyfriend Peter. While Linda does eventually overcome her doubts, she still has a big decision to make. Will she settle down and marry Dave, or will she chuck everything away and run away with Peter?

I first saw this film on YouTube back in April of 2011. I really liked it and was repulsed by its obscurity here in the U.S. After a few more viewings on YouTube, I finally decided to purchase Lace International's Region 2 DVD of the film, released back in March. The film is presented in its original widescreen aspect ratio and looks spectacular. The only downside is that the DVD, despite the popularity of the film, has no bonus features whatsoever, not even a trailer. Still, this DVD is worth the purchase, especially for fans of British cinema. I should mention however, that prior to this DVD being released, the only other DVD release of this film was incidentally, here in the United States, but on a bootleg DVD from notorious bootleg outfit Jef Films. I have not seen that DVD and never will since that DVD had quality that was even worse than the British VHS of that film. Thankfully, with this spectacular widescreen release, that U.S. DVD has pretty much vanished into digital obscurity and was already out of print by the time this new DVD arrived.

Once again, I highly recommend this film and DVD. And for those who would like to purchase this DVD but concerned about compatibility due to this being a region 2 release, I also highly recommend investing in a region-free DVD player as well. 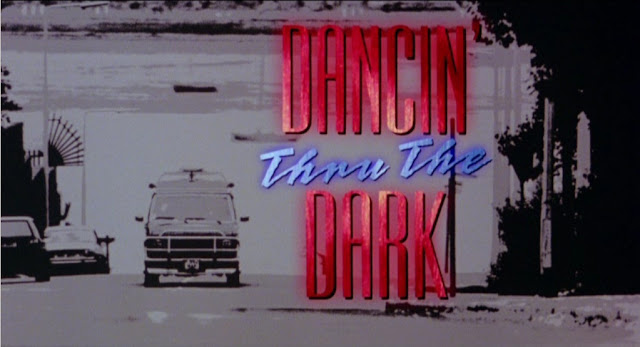 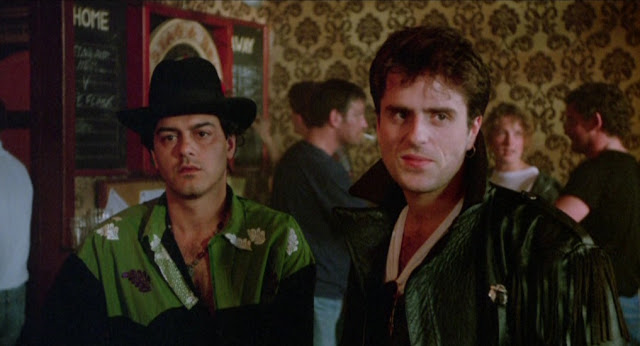 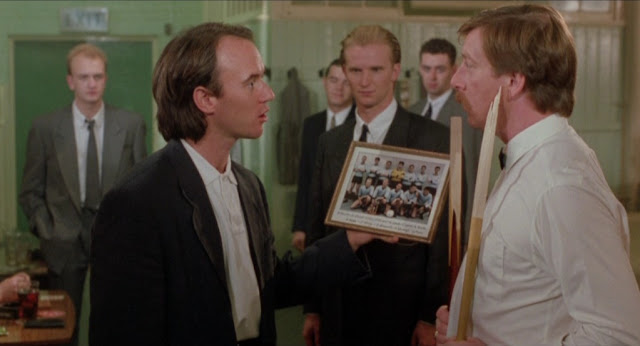 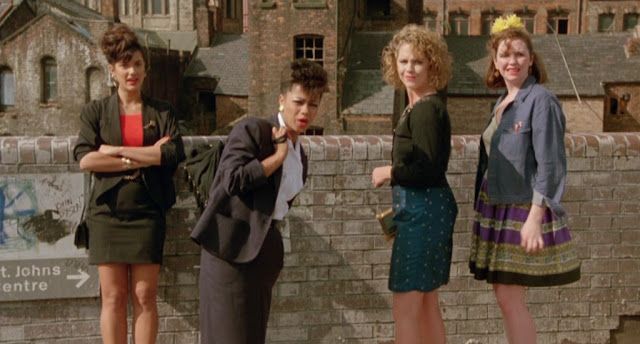 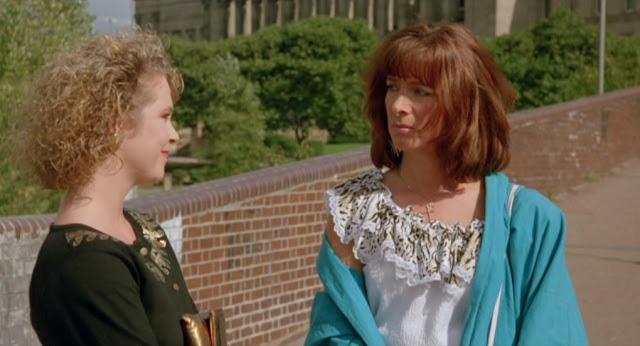 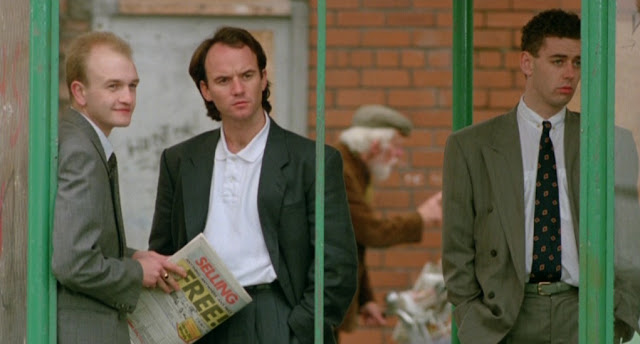 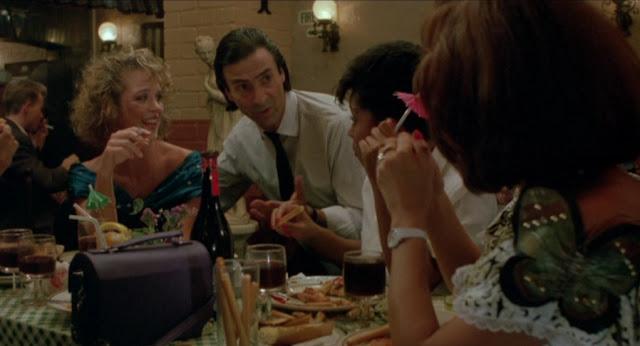 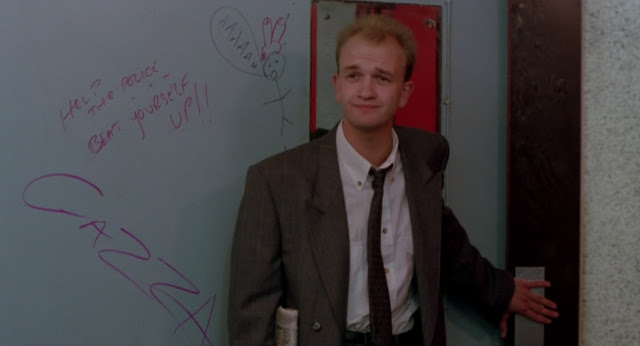 Posted by Ryan W. Featherston at 7:13 PM No comments:

I've been a fan of Jalal Merhi's films for maybe since February of 2009 after watching Tiger Claws one time on YouTube. I eventually acquired some of his films on VHS including Tiger Claws and Tiger Claws 2, Talons of the Eagle and TC 2000, among others. Many will disagree with me, but his movies are quite fun in my personal opinion.

I found one film of his that does not seem to have seen much of a release back in January of 2011. That film was Death Junction (1995), directed by John Bradshaw (The Big Slice) and veteran Canadian actor Al Waxman (Cagney and Lacey, The King of Kensington). I had seen a trailer for it on YouTube back in August of the year before and that along with its rarity got me all the more interested. 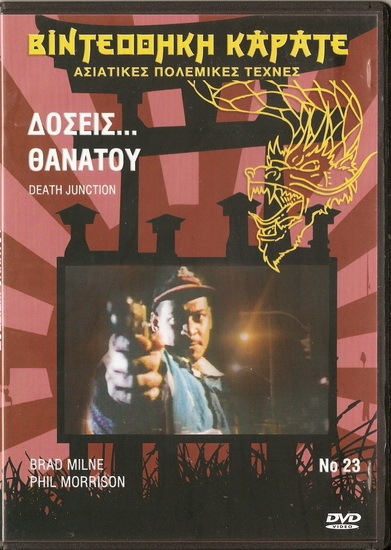 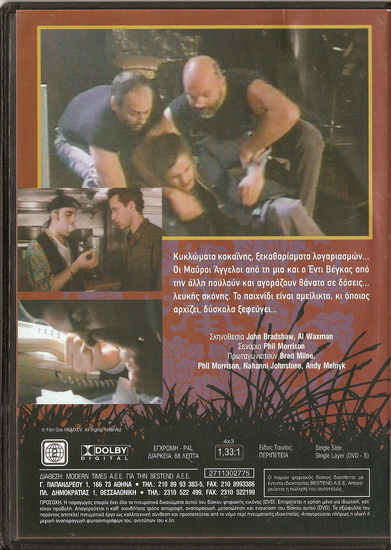 The movie centers around Johnny (Phil Morrison - The Big Slice, Prom Night 4) who is a small time drug pusher for Toronto crime boss Eddie Vegas (Brad Milne - Zombie Strippers, Crisis). Johnny and Eddie are on extremely good terms until a major shipment is stolen and Johnny is falsely accused of stealing the shipment after it is found in his bedroom by Eddie and his men. Now all Johnny has is himself as he fights back against the man who framed him but at the same time, Eddie and his men have a bounty on Johnny's head too! Meanwhile, Toronto police lieutenant Jenkow (Waxman, in what is merely a special appearance) is dead set towards putting a stop to the violence.

For a low-budget martial arts crime thriller, the film is quite gritty and violent but enjoyable. There are some good martial arts scenes along with a catchy score by Merhi's in-house composer Varouje and some of the scenery in the more urban parts of Toronto are quite effective in my personal opinion. Morrison and Milne play their parts quite well.

As I've said, the film has not really seen much of a release outside of Canada, but in January of 2011, I found on eBay, a rare Greek budget DVD quietly released by an outfit called Modern Times, which seems to have released mostly Martial Arts films onto DVD in Greece, including the Canadian Martial Arts camp classic Dragon Hunt (1990) and Sometimes a Hero (AKA: Cold Vengeance) (2003), the latter of which is another Jalal Merhi production.

The DVD comes in a slim plastic case, similar to many DVDs found at the dollar store or bargain bins and has 6 chapter stops. The presentation is in full screen, but the quality is actually quite good, despite some minor artifacts and glitches that pop up a few times. In one scene there is some VHS tracking-like thing that shows up, which suggests that a tape master may have been used for this release. The DVD does also come with hard-coded Greek subtitles, which cannot be removed, but then again, I can't really complain. Sound is decent as well. 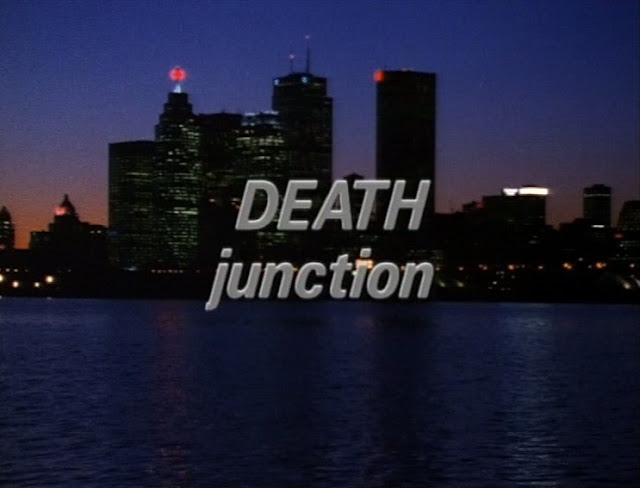 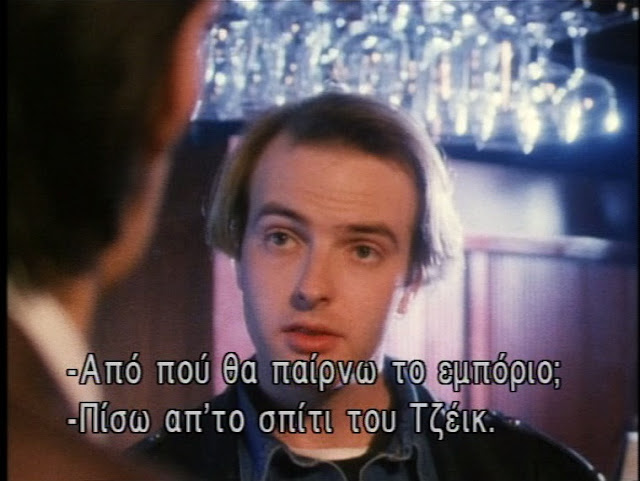 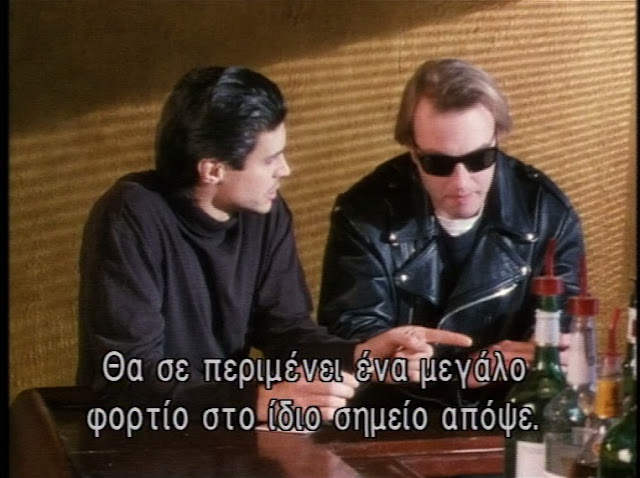 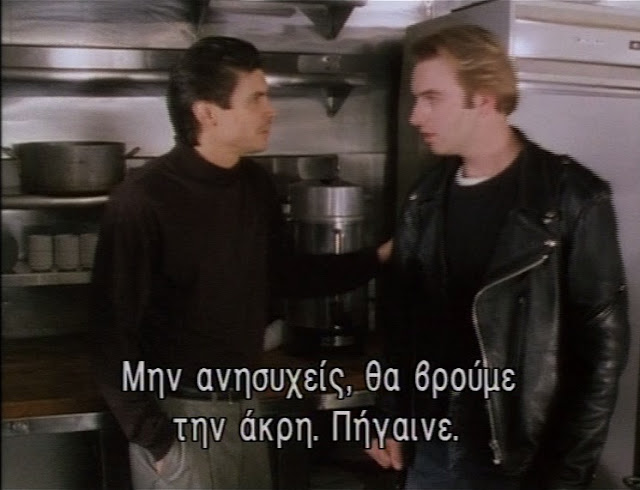 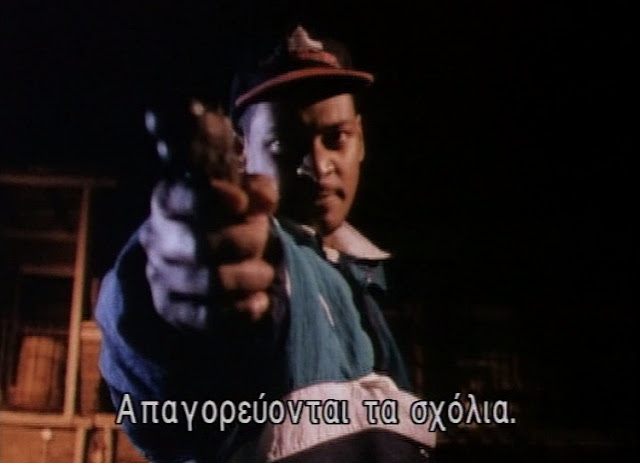 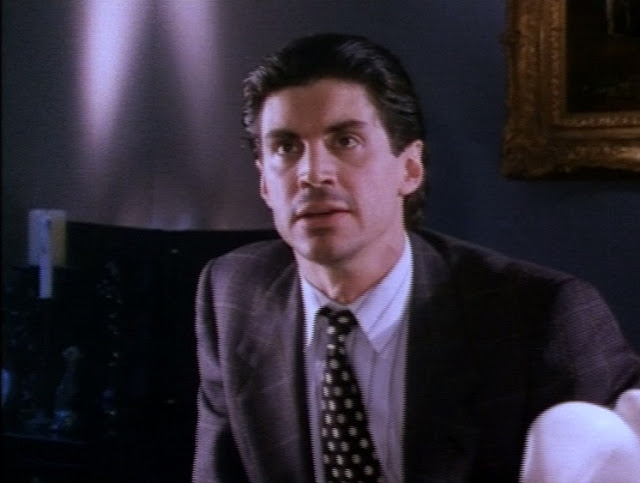 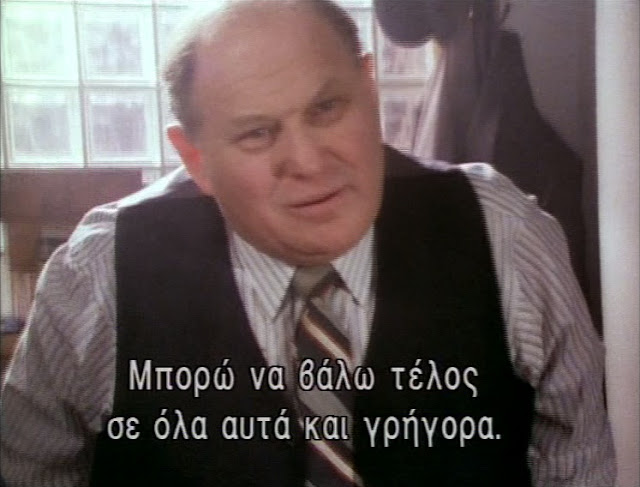 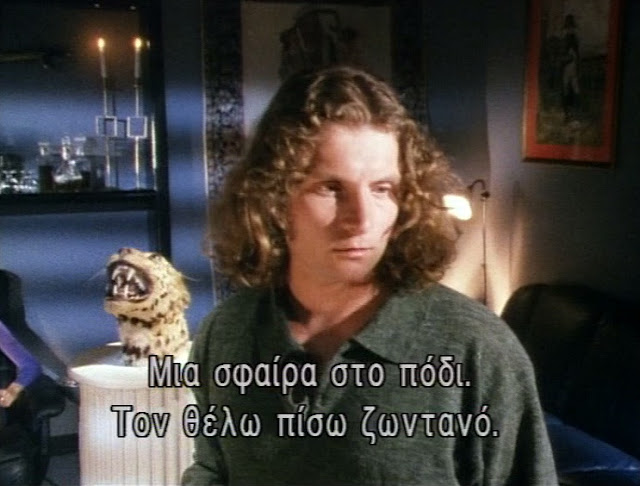 Now here's a real favorite of mine! This Charles Band produced Sci-Fi action flick Eliminators has been a guilty pleasure of mine ever since renting it at the now-out of business Hollywood Video on Woodway here in Houston at the age of 10. Some really great action, neat effects, especially for it's time, and a plot that does, in my personal opinion, make the film really all the more awesome.

I've had the Playhouse Video VHS since 2008 when I found it at a local Mom & Pop store for just a dollar. Only recently I obtained the even rarer Canadian VHS from Cineplex Odeon/MCA through a Facebook deal. Like with any other Canadian tape of a film I already have a U.S. tape of, I wanted to post some pictures of the 2 tapes to compare them with. 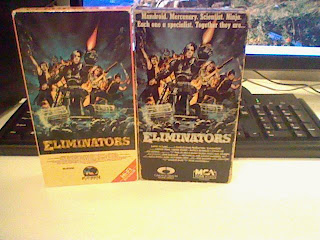 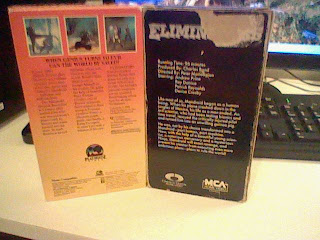 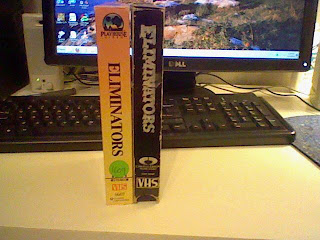 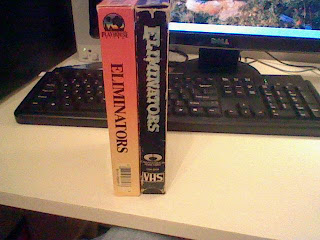 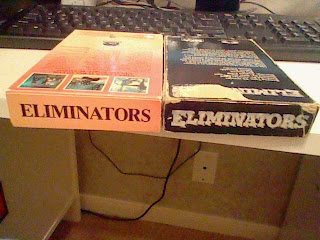 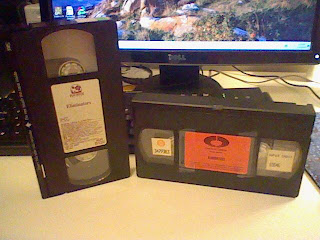 Posted by Ryan W. Featherston at 2:35 PM No comments: